Careless drivers convicted thanks to the public

Thanks to the vigilance of the public and the determination of Warwickshire Police’s Op Snap team, five drivers have recently been convicted in relation to Careless Driving in Warwickshire with many more opting to pay fines or attend retraining courses.

Thirty-seven year old Martin HUBBARD from Waverley Square, Nuneaton was caught on dashcam by another driver, driving without due care and attention on 26 May 2022.  Whilst on a busy motorway in heavy traffic with 50mph showing on the overhead gantry, he undertook the witness and when slightly ahead jerked the steering towards the witness before undertaking other motorists.

Forty-one year old Adam Tobias NICKLIN from Main Road, Ansty in Coventry pleaded guilty to Careless Driving when he appeared at Warwickshire Magistrates Court on 26 July 2022 after being caught on dashcam by another driver.

The magistrate heard that on 16 May 2021 Adam Nicklin had overtaken other vehicle(s) whilst crossing a T-junction at speed in a 30mph zone on Nuneaton Road at the junction of Marston Jabbett in Whitestone.  (photo below)

In sentencing, the magistrate considered disqualifying Adam Nicklin, however he took into account mitigating circumstances and the guilty plea and he was fined £140 and received 6 points on his licence and ordered to pay costs of £110 and £34 Victim Surcharge.

A 25 year old man from Rugby pleaded guilty to Careless Driving of his Yamaha motorcycle in Addison Road, Rugby on 24 September 2021 when he was caught on dashcam pulling wheelies.

Taking his guilty plea into consideration, Warwickshire Magistrates Court sentenced the motorcyclist on 8 March 2022 to 6 points on his driving licence, £90 fine and £110 costs with an additional £34 Victim Surcharge.

Two other drivers were charged with failing to identify the driver in relation to the careless driving offences captured on Op Snap.  This is often looked upon as a more serious offence than Careless Driving attracting up to 6 points and £1000 fine.

A 37 year old man from Rugby pleaded guilty to failing to identify the driver on 5 July 2021 in relation to an incident caught on dashcam on 31 May 2021 on the A428 in Houlton/Crick in Rugby.  The dashcam footage showed the driver overtaking a cyclist and motorcyclist contravening solid white lines at speed. 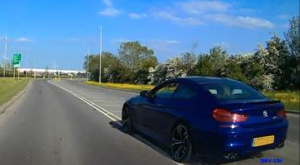 The 37 year old appeared at Warwickshire Magistrates Court on 7 April 2022 where he was fined £440, received 6 pts on his driving licence and was ordered to pay costs of £85, and Victim Surcharge of £44.

A 32 year old man from Rugby was disqualified from driving for two years for failing to identify the driver on 26 October 2021 in relation to a Careless Driving offence caught on dashcam.  The footage shows a car spinning out of control as the driver tried to turn right at the Lawford Road major junction on 31 July 2021.

PC Ken Bratley, Op Snap Coordinator said “Op Snap is really popular as more and more people have dashcams in their vehicles or wear a headcam when they are cycling, motorcycling or riding a horse.  Even pedestrians can submit moving footage from a mobile phone if it is safe to record it.    This has seen the number of submissions we receive increase by 40 per cent over the last 6 months.

“We are working hard with Warwickshire Road Safety Partners to do everything we can to reduce serious and fatal collisions and are delighted the public wants to get involved by using Op Snap to make our roads safer for everyone.  We will continue to use Op Snap alongside traditional enforcement methods to help educate those drivers with poor attitude or decision making skills that it’s not ok to drive carelessly or dangerously and put yourself and others in danger of death or serious injury.“

When Warwickshire Police receive Op Snap footage, it is reviewed by a police officer to determine whether a moving traffic offence has been committed.

Where there is evidence of a driving offence, a Notice of Intended Prosecution is served, with options including an offer to attend a What’s Driving Us retraining course, a fixed penalty fine and points, or electing to have the matter heard at court.  These options aren’t open to everyone.  The most serious offences go straight to court.

More information about Operation Snap can be found here www.warwickshire.police.uk/operationsnap