In true Christmas spirit, the public, CCTV operators and even a Christmas elf all contributed to improving road safety by assisting Warwickshire Police in proactively targeting suspected drink and drug drivers during the national Christmas anti drink drug driving operation that ran from 1-31 December 2021.

As well as being stopped and arrested, drink and drug drivers also saw the anonymised details of their arrest featured on social media throughout the campaign. These can be found on Facebook @WarwickshireRoadSafety @OPUWarwickshire and @WarwickshirePolice.

The campaign also encouraged the public to report the details of suspected drink or drug drivers to them over the Christmas period and many did.

Thanks to a member of the public a 34 year old man from London was arrested on suspicion of drink driving on the M40 on New Year’s Day. The arrest was made at 05.05hours at the M40 Southbound Services near Warwick after the concerned member of the public contacted the police. Officers stopped the driver as he drove off and he failed a breath test. He was later charged with drink driving and is due to appear before Coventry Magistrates at 10.30hours on 28 January.

Some suspected drink or drug drivers had a lucky escape following collisions including the driver of this BMW who got the bend completely wrong on Woodlands Road Bedworth ending up high up in the hedge. Luckily no one else was involved and the driver managed to escape uninjured. The driver failed a roadside breath test and was arrested at the scene on suspicion of Drink Driving. This was posted on Facebook on 8 January. 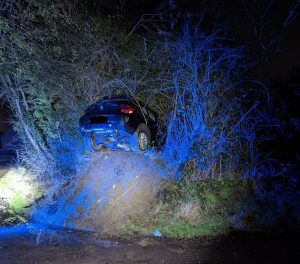 Unfortunately this is one of many collisions involving drink or drug drivers during December and any driver who is involved in a collision is breathalysed and may be arrested and charged.

In 2020 despite lockdown, 3 people in Warwickshire lost their lives as the result of a collision where drink or drugs was a factor and 24 people suffered serious, often life changing injuries.

Some drivers chose to ignore the advice of officers including a 29 year old man from Coventry who was arrested at 1.21hrs on 12 Dec on suspicion of drink or drug driving after officers stopped his vehicle on The Green Dunchurch. Officers had already given him advice after he was seen on CCTV walking towards his car.

The Rural Crime Team also came across a 31 year old woman from Evesham at 01.40hours on Sun 12 Dec in Rother Street, Stratford-Upon-Avon and advised her not to drive. Despite this warning she was subsequently stopped in her car and arrested on suspicion of drink driving. 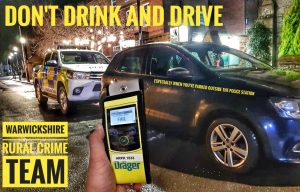 CCTV operators also assisted police with information leading to arrests including a 37 year old man from Rugby who was arrested at 02.58hours on Christmas eve on suspicion of drink driving in Hillmorton, Rugby.

Even Kenny the Christmas Elf from Kenilworth and Warwick Rural Police got involved by urging drivers to make sure you are fit to drive especially the morning after a night out when you could still be over the legal alcohol limit. 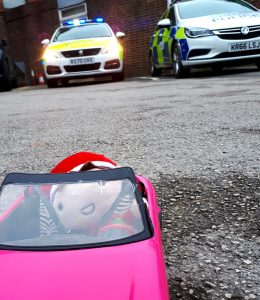 Sergeant Sean Bridle said “Arresting and charging drink and drug drivers in Warwickshire will always be a priority for officers whatever the time of year because if you drive at twice the legal alcohol limit you are at least 30 times more likely to cause a road collision than a driver who hasn’t been drinking.

Warwickshire Road Safety Partnership Chair and Police and Crime Commissioner for Warwickshire Philip Seccombe said “Road Safety is a shared responsibility and I’m delighted to see the public and partners all coming together to play their part in making Warwickshire’s roads safer for everyone.

“Any amount of alcohol affects your ability to drive and we also need drivers to take full responsibility for their actions and not to drive under the influence of drink or drugs.”