During the first operation, Roads Policing Officers (RPO) and Special Constables intercepted 10 vehicles and brought them in to be weighed.  This resulted in two drivers being prosecuted for overweight vehicles. The vehicles were also prohibited from moving until their weight could be reduced.

During the second operation on 10 March at the Corley M6 Services northbound, 20 commercial vehicles were stopped and brought in to be checked by officers and the DVSA.  Of these 17 received Traffic Offence Reports –  that’s an 85% hit rate. Six of these prohibitions were within the first hour. 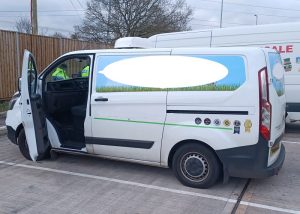 PHOTO Eleven vehicles were found to be overweight including this Ford Connect van that was 33% overweight with 50% of the weight being carried over the rear axle.  The drivers of all eleven vehicles received TORs and were prohibited from continuing their journeys until the loads were reduced to the legal limit. 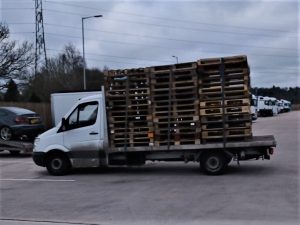 PHOTO As well as being overweight, this Flat bed was carrying pallets over height.  The driver received a TOR and was prohibited from continuing his journey until the weight and height was reduced.  This is even more concerning as the vehicle also had a defective tyre (PG9 prohibition) that needed replacing before the vehicle was allowed to continue.  PG9’s are given for mechanical problems or for the condition of a vehicle’s bodywork and equipment making the vehicle unsafe. 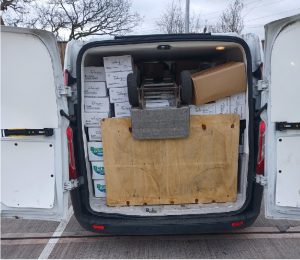 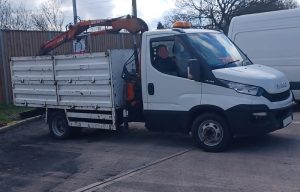 PHOTO The driver of this Iveco tipper with Hi-ab received a TOR and was prohibited from continuing as his vehicle was almost 50% overweight.  The DVSA officers also issued the driver with a PG9 prohibition for no handbrake.

Words of advice were also given to drivers for marginal offences where vehicles were very slightly overweight.

Officers also stopped a VW Transporter & Car trailer for excessive tints that only allowed 31% light transmission through the front and side windows.  The driver was required to remove these to improve his visibility before continuing his journey.

Two drivers had failed to safely secure the loads on their vehicles and advice was provided by officers and the loads secured.

Officers were not just on the lookout for overweight vehicles, and insecure loads, one driver was reported for using a mobile phone whilst driving and also had no insurance.  He received a TOR and his vehicle was seized. 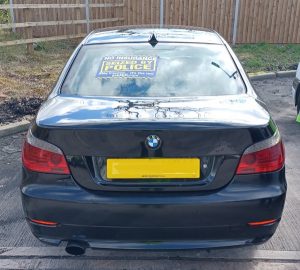 PHOTO This BMW 520 was seized as the driver had no insurance, tax or licence. 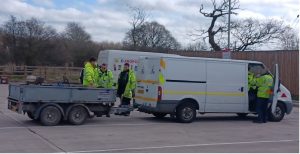 PHOTO This Transit and Trailer was seized for driving with no insurance and no licence or tax.  The vehicle was also in a dangerous condition as it had been used for carrying passengers in the rear of the van.

Further operations to support the Warwickshire Road Safety Partnership target of reducing the number of people killed and seriously injured on Warwickshire’s roads by 50% by 2030 are planned.